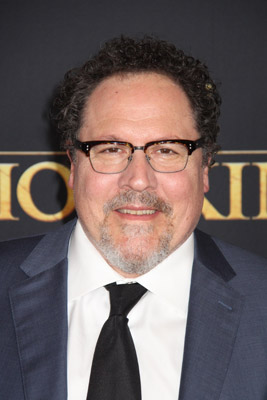 I have been fan of Jon Favreau for years. Whether it was in front of the camera when he co-starred in 1996’s sleeper hit, Swingers, directing Hollywood’s comeback kid Robert Downy Jr. in Iron Man, or blowing the lid off our directorial expectations with The Jungle Book and now The Lion King. This guy truly has no limit to his talent. But what I liked most about him is he is approachable and likeable in real life as he is playing one of his fun loving characters. He is always the consummate professional on the carpet who organically appreciates his fans, respects the media, and has a deep seeded passion for what he does.

We chat with this Hollywood veteran how virtual reality and gaming are opening new avenues  for filmmakers and his hidden little gem in The Lion King.

Q: How much technology changed from when you did The Jungle Book?

The Jungle Book, I’ve been working on both these movies back to back for about six years. And all the new technology that was available, I had finally learned how to use it by the end of The Jungle Book. And at that point, with the team that we had assembled for it, all the artists, because a lot of attention is paid to the technology. But really, these are handmade films. There are animators working on every shot, every environment that you see in the film other than actually, there’s one shot that’s a real photographic shot but everything else is built from scratch by artists. And we had a great team assembled. And then the idea of using what we learned on that and the new technologies that were available to make a story like The Lion King with its great music, great characters, and great story, it seemed like a wonderful, logical conclusion. And so that was something we set out to do.

Q: How long did you work on the film?

I’ve been working about three years on this one. And a lot of them have been working for the same amount of time. Because they came in back when it was pencils. So it was a huge leap of faith for this fantastic cast we have. And of course musically, Lebo M. (singer) and Han Zimmer (composer), who were so involved with the first one to trust that it would turn out well. It was a big leap of faith for everybody. And in many cases, they kept coming back and recording again and trying new things, especially with the comedy bits. So although, this isn’t like one of those things where I’ve been toiling away alone. It’s been a huge raft of artists, people who were involved with developing the musical landscape of it, doing early recordings, and coming in and contributing through improvisation, redoing scenes, rewriting scenes. So this team here isn’t just a bunch of people that recorded one time at a music stand and come here for the press conference. These were all people who were collaborators and filmmakers along with me. 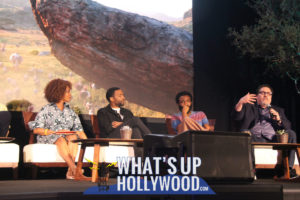 Q: Could you talk about VR (Virtual Reality) game which you created?

That was one of the big differences between this and The Jungle Book. In The Jungle Book, we were essentially using the same motion capture technology for performers and cameras as had been developed ten years prior for Avatar. But towards the end of that, there was a whole slew of VR, consumer facing VR products that were hitting the scene. And we started experimenting with it at the end of The Jungle Book and realized that we could build this really cool system of filmmaking using game engine technology and this new VR technology. And so we essentially were writing code as we were going for a multiplayer VR filmmaking game. And that way I could bring in people who don’t have any background in visual effects. We would design the entire environments. We took all the recordings that we had from the actors. We would animate within the game engine. In this case, it was Unity. And the crew would be able to put on the headsets, go in, scout, and actually set cameras within VR. And whenever anybody visited, I would pop them into the equipment. 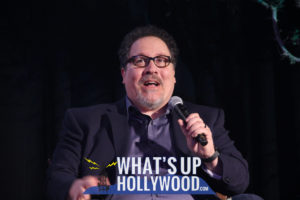 Q: When the VR game will be on sale?

It’s a very specific VR game that only works for making one movie. But we built all the assets from it. And so we’ve been talking. I’m not sure where we’re at about different VR type experiences. Because gaming and filmmaking, it’s all overlapping so much with so much change and disruption. And I think the effort here was to keep the tradition, not just the tradition of the film and stage production that came before us, but the filmmaking tradition. Oftentimes when new technology comes online, it disrupts an industry. But with just a little bit of effort, we were able to build around the way filmmakers and film crews work. So a guy like Caleb Deschanel, fantastic cinematographer who I’ve always wanted to work with, inviting him to do a very technically advanced film without any prior background in visual effects and just saying hey, we’ll make it so that you could just make a movie as you would have made The Black Stallion (1979’s film). And let’s bring you in and having people like Rob Legato (Visual Effects Artist) who is a big part of, I can’t really take credit for all these innovations. It was a whole team of people. Magnopus (Movies, Game and Software development company), Rob Legato, people from MPC (Visual Effects company). But once we set this up, it’s fun for them to see what it’s like. But then we would actually have cameras driven in VR space by a film crew that was in a room about the size of this room with dollies and cranes and assistant directors, script supervisors, set dressers. So we kept the same film culture and planted it using this technology into the VR realm. And so although the film was completely animated as far as performances went, it allowed a live action film crew to go in and use the tools they were used to. And so part of what’s so beautiful about the lighting, the camera work, the shots of the film, was that we were able to inherit a whole career of experience and artistry from our fantastic team. And I think that it’s nice to look at technology as an invitation for things to progress and not always something that’s going to change the way everything came before it. I think there’s a balance between innovation and tradition. 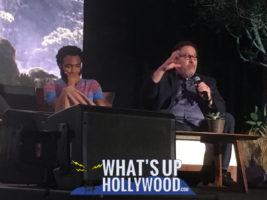 Q: Is there any Easter egg we should know in the film?

There’s a gag that references another Disney property in there. And I drew inspiration. They do that in the stage show. They threw in the joke about Frozen in there. That must have happened after Frozen came on Broadway. And so we kind of doff the cap to another live action adaptation of a Disney animated classic in the film. 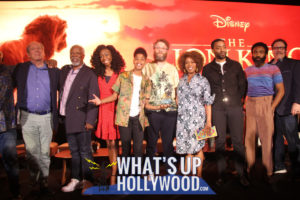 Q: How you blended the actor’s reference video with the more animal like qualities of this sort of virtual reality computer animation?

So there were lots of steps to this process and that’s why it took so long. And that’s part of why it was interesting over three years. Because it was always different. Each phase in the beginning, it was pencils and voices. And then we always, to me, casting is, that’s the foundation of great cinematic story telling. I didn’t come from the tradition of visual direction. It’s always been about storytelling and performance. I came up as an actor. So when I have my foundation of you can’t compromise one iota on cast. You have to get the best people you can. Because they’re the ones who are going to do everything. And we just built off of our cast. So it started with us just in a room, like a black box theater. It was like theater rehearsal. It really was like what you would do when you grab the book for the first time and everybody walks around on the stage. And you start to rough in, you start to figure your character out. And I had them all performing together, we would get them in groups, we would have everybody michrophoned so that the sound was usable for the film. And we would have them interacting with one another and improvising all the things that they’ve mentioned. At that point, we would take like a radio play that we would cut from that and we would shoot video on long lenses just to have reference of what they were doing with their faces. And we would give that to the animators and the animators would take the choices that they made and interpolate it into what a lion would do or a hyena would do. Because if we just motion captured their face and put a human expression on the animal’s face, I was concerned that that would blow the illusion of it being a naturalistic documentary. We looked at a lot of the work that Hans (Zimmer, composer) has done. Like Planet Earth II. All of those David Attenborough’s BBC documentaries and how much emotion can be expressed without human performance just through music and editorial and the stories you’re telling and looking at movies like Babe (1995’s film) that was inspiration for how we did The Jungle Book, with how much expression and emotion could come out of those characters without having human performance. And so it really fell on the animator’s hands to try to figure out how to express their preferences through the language of an animal’s emotive language.