Meet the young cast of “Timmy Failure: Mistakes Were Made” 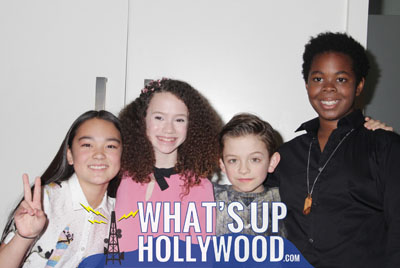 Its easy to forget when you watch a movie that stars a group of kids that somewhere there was a person who was in charge of keeping the potential for chaos at a bare minimum.

Yes, they are professional actors but at the end of the day they are also kids who are often star struck or distracted by the technology they are about to use for their scene.

As I was walking to the Team Disney building (the famous building that seven dwarfs holding the roof in Walt Disney Studios in Burbank) where the junket held at. I see the cast of kids jump out of their limousine and rush to the iconic landmark and start taking selfies. Fortunately they kept the energy in the interview room. 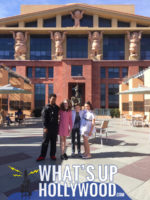 Q: Could you introduce yourself and the character you played?

Winslow Fegley: Hi, I’m Winslow Fegely, and I play Timmy Failure. Timmy is kind of this 11-year-old kid who has this polar bear imaginary friend, and it is all about his adventures, both his personal and his detective agency that he owns. It’s really cool to see how all these characters fit in.

Chloe Coleman: Hi, my name is Chloe Coleman, and I play Molly Moskins in Timmy Failure. Molly is not afraid to stand out or speak up what she likes, and she likes to make sure people are happy. So when it comes to Timmy wanting something, she is there for him. Or if anybody wants something. She likes that about people, especially when they are not like anybody else. She is not like anybody else. 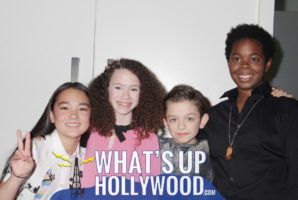 Q: What do you think?

Q: How did you guys get approached with the script? What made you want to do it?

Chloe Coleman: I think one of the main reasons I really wanted to do this film is, when I went to the audition, I didn’t even get a call back when they offered the job. But I read about my character, and what I liked is how she is not like everybody else. She likes to speak up for what she wants. She’s an activist and a feminist, so when it comes to that stuff she’s supports it. I thought it was an interesting role, and I am happy I got it. 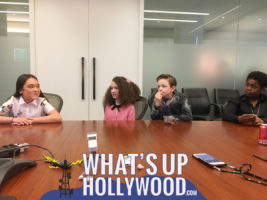 Winslow Fegely: When I first got one of the first or second auditions, I started reading the books with my dad, and I felt like this story was so unique and that Stephan (Stephan Pastis, author and screenwriter) did a great job writing it – all the books, everything. It was really great being able to audition.

Ai-chan Carrier: For me, I actually auditioned for Molly Moskins, and, in one audition, we got a call a few weeks later, and we were like “we want to sign a contract with you, blah blah blah.” I mean it’s Disney first of all. And then my dad was like, but you got Corina Corina. And I was like, “who is she?” And my dad is like, “well, she might be this evil person.” And I am like, “okay.”

Q: What did you guys do in between takes?

Winslow Fegely: We would always hangout almost every day if that was onset or at the apartments. We were at the same complex so we would go to the pool and just kind of hang out. But it was really great working with the kids.

Chloe Coleman: We’d even go to each other’s apartments all the time and everywhere. I don’t know who, but wasn’t there somebody we couldn’t find in one of our apartments?

Winslow Fegley: Were we playing hide-and-go seek or something, or was it just hiding?

Q: What was your favorite scene to film?

Winslow Fegley: All of the scenes in the school were great. Because of them. Another really fun scene for me was when I was at the fence with Craig Robinson (played Timmy’s therapist). And he’s like coaching me in kind of pivotal point in the movie. Craig would like sing and I would beat box to it. We were just kind of like, just like chilling at the fence.

Chloe Coleman: I like the tree house scene especially it was a set up to Molly and Timmy’s awkward relationship, but also how, I think it set up their relationship, how it can be between them and at the same time, in a ways, it was precious just because, obviously, Molly, in some ways, might like him a bit. I liked that scene only because – you know. And you get to see the cat and just how awkward it can be for him in the Molly Moskins house.

Ai-chan Carrier: My favorite is when I was near all of the light switches, and I turn and smile and I do my little eyebrow thing. It’s like – kinda zooms out, and that was really fun because I did it like 20 times, and sometimes I would do my eyebrows way too much, and Tom (Tom McCarthy, director and screenwriter) would be like, “Ai-chan, that’s like three eyebrows right there, chill.” 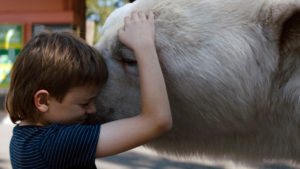 Q: Is the Polar Bear real?

Winslow Fegley: I think that’s kind of the mysterious Portland vibe there. I think he is the imaginary friend to Timmy because of his absent father and I think the bear kind of represents that. He even calls him “Papa Bear” in the film. But while we were shooting it, it was really just this guy in like a giant 9 foot suit. He made the guidelines for the editing team and also he was just so good to work off of. They had to put two fans in his head because it was too hot.

Chloe Coleman: Sometimes he wasn’t there. Actually half of the scenes I forgot that the polar bear was in the movie. And then when I saw it, “Oh my gosh.” Yeah, totally. And then total enters the movie and he takes up half the screen, but that’s fine. [laughs] 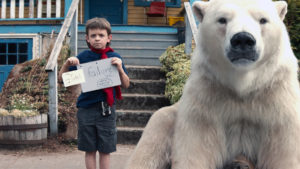 Q: Is it difficult to work off of someone in a suit rather than a polar bear?

Winslow Fegley: Not really, because he really did a great job of just acting like a polar bear. He kind of mastered the mannerisms and everything. It made it a lot easier for me to work off of, and then I would just picture, “Okay, this is an actual polar bear,” in my mind. And then just try and think of it that way.

Q: These characters are all based on the book. Did you take inspiration from any other character from a TV show or movie for your particular characters?

Ai-Chan Carrier: Yes. In the script, it doesn’t talk about Corrina Corrina a lot. I asked Tom (Tom McCarthy, director) and Stephan (Stephan Pastis, author), “What should I do here for Corrina Corrina? What is she like?” Because it wouldn’t really say it in the script as much as I wanted it to. And these were their exact words: “What do you think?” So I was reading the books all the time looking at just a single line and it helped me get her vibe. 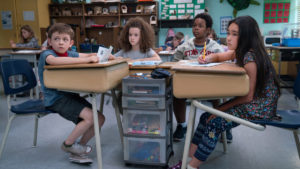 Chloe Coleman: When I read the books, Molly’s character, she stands out in the book just because of how she is. And she’s not afraid to get in people’s way. And she likes to speak out for what she wants. So it was kind of easy to relate to that character in some way because people do like to talk about what they want.

Winslow Fegley: I definitely got a lot of inspiration from the book. Just looking at some of the stuff there. And my dad really helped me go through some of that stuff. And I watched Humphrey Bogart’s Double Indemnity, Steve Martin in Dead Men Don’t Wear Plaid. 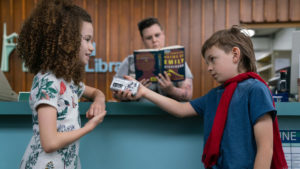 Q: In this movie, there’s also a school pet that comes into the story. What are you like with animals? Do you have any pets at home? And do you have any funny animal stories from life?

Winslow Fegley: I have a doggie, name’s Mochi. I think that would be my sidekick. (In the film, Polar Bear is my sidekick so) it is just a giant version of my dog. But the food would be very expensive. 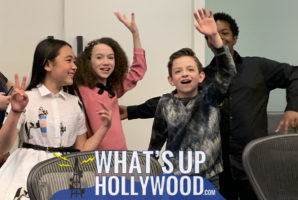 Chloe Coleman: I have cat. He is about 12 now and I’ve grown up with him all my life. And he’s still energetic. He’s not that old. It’s Leo, that’s his name. He’s an Orange Tabby. When I was younger, I don’t know why, but I put bracelets and necklaces on my cat not knowing how painful and embarrassing it was to him. It was horrible. And one day I’m like, you know what, I’m going to give you a bath Leo. And I sprayed him down with soaking wet conditioner. And just products I found in a basket. And my sister was there just looking at me like, “What are you doing?” “I’m giving him a bath.” And the weird thing was is that instead of screaming and clawing all over the place, he was just there enjoying it. He just didn’t really care. Like of course he was shaking, it was soaking cold water. But otherwise it wasn’t a problem. And my dad came in the room, and at first he was in shock, like trying to process what I was doing.

Ai-Chan Carrier: I used to have two Dachshunds. Miniature Dachshunds. They passed away though. But now I have a dog named Coco Puff. Coco, she’s like the family dog. She loves kids. She runs super fast.[laughs]. And I also love horses. I love taking care of horses as well and I ride horses. Yes, I have three cats in Japan that my grandparents take care of. Chee-chan, Poo-chan and Koo-chan [laughs].

Timmy Failure: Mistakes Were Made is currently available on  Disney Plus+